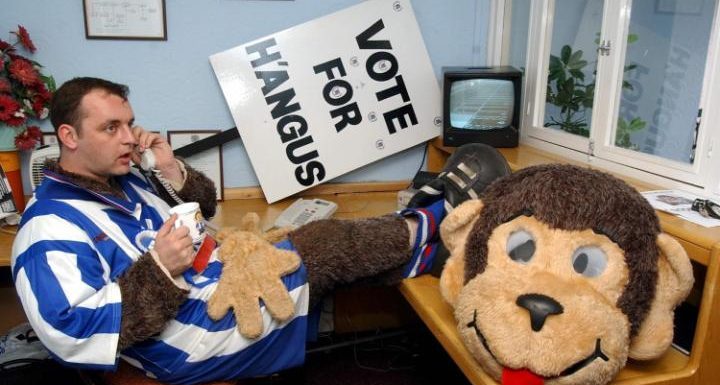 The ashen face of Peter Mandelson said it all. As he glared across the count at the celebrating 7ft monkey in a Hartlepool shirt, it was clear that he understood his party had just suf­fered a humiliating defeat of gargantuan pro­portions. Arhur Preece, the ancient Lib­Dem candidate for mayor, got the message too and retired from politics only days later.

Odd, then, that the national media should miss the importance of the result completely. The Sun sent a gorilla to confront the new may­or, the Guardian decorated an apparently ser­ious article about the fledgling civic leader’s inaugural day with a huge photo of a bunch of bananas, and one TV station made H’Angus their lead story without even a cursory attempt to explain the result to viewers. The coverage made much of the undoubtedly hum­orous side of the story, but ignored the underlying rea­sons that drove 7,000 people to vote for Hartlepool’s mascot.

Much of the town would be unrecognisable to a visitor raised on a diet of grainy, black and white, whippet-strewn shots of Andy Capp lookalikes foraging for sea coal, but the un­employment of the past three decades has left some areas hideously scarred by poverty. Ev­eryone outside Westminster seems to accept that poverty is inevitably followed by drugs and crime, and this is as true in Hartlepool as anywhere else. Years of Labour dominance on the local council did little to help and the recent arrival of a LibDem/Tory coalition even less.

Arthur Scargill and his Socialist Labour Party spotted the growing alienation and at­tempted to oust Mandelson at the gen­eral elec­tion. The Tories sent Gus Robinson, a local property developer and boxing promoter with no prior political record. Despite his in no way homophobic “Vote for Gus, He’s One of Us” slogan, neither Robinson nor Scar­gill got far. Both were identified as politicians and therefore no more trustworthy than the sitting MP.

Nobody could argue that H’Angus was a nor­mal politician and his consistent pledges to tackle crime by “getting kids off the streets to stop it before it happens” were a refreshing change from the prevailing cross-party vogue for macho posturing on crime issues. There were other factors running in Stuart Drum­mond’s favour too. No one likes a pompous lo­cal bigwig and a hardened cadre of H’Angus­ites had got bets on at remarkably long odds.

Some commentators seemed puz­zled as to why the recipients of interminable chimp-choking and gibbon-garrotting taunts should choose to remind the nation of the myth that triggered the mirth. Again they missed the point. To the eternal disappointment of visiting fans, these insults lost their power years ago. We haven’t just embraced the yarn. We’ve bought it drinks, taken it home to bed and of­fered it a choice of a full fry-up or coffee and croissants the next morn­ing.

As early as 1890 Hart­lepool Rovers ad­­opted a little red monkey on a gib­bet as their badge, while the local easy riders of the 1970s op­ted out of psy­cholog­ical war­fare with the Hells An­gels by ri­ding under the colours of the Monkey Hangers. At ice cream vans, chil­dren politely ask for “monkey’s blood”, not raspberry sauce. No one in Hartlepool has a problem with killing our closest biological cousins and anybody who bothered to ask would know that.

So H’Angus cheered us up a bit by winning in the aftermath of a third successive play-off semi-final defeat, but he still faces prob­lems in his new £53,000 job. It’s hard to imagine him poking bananas from his crotch, rubbing his thighs at female stewards or parading in­flatable sex toys with­out the cover of a furry brown suit, so his questionable sexual humour may remain in the past.

A bigger danger seems to come from the likes of Mandelson, who has now declared that Stuart “ran a great cam­paign” and “is a quick learner”. This is worrying talk. When you elect a man who champions local youth, strives to answer questions honestly and follows his club the length of the country, you do so prec­isely because he has learned nothing at all, ever, from the Mandelsons of this world.

Finally, consider this. On the same night that the BNP took three seats in Burnley, and in the same week that one in five French voters backed Le Pen, the people of Hartlepool register­ed their disgust with es­tab­lished po­l­­it­ics by electing the local foot­ball club mas­­cot. I’ve never liked mas­cots much and I’m far from keen on his simian sexism, but, given the wider context, I’m rather proud of H’Angus.

Published with the kind permission of www.wsc.co.uk July 2002