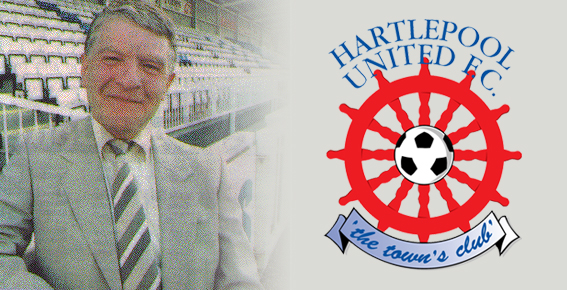 Former Chairman, saviour of the club, and lifelong Hartlepool United fan Harold Hornsey passed away 17 years ago today. For those who were around in 1994, we’ll always remember what he did for the club he was so passionate about.

After a spell at Gray’s Shipyard, Hornsey started working for Scorers, a local Hardware store, in 1965. Three years later he left to set up his own business, and this soon expanded into a small chain – one that extended when he was approached by the family-owned Scorers business and given the opportunity to buy them. After merging with Leonards Electrical, the stores are now branded as Homesmart.

Hornsey had always lived in the town and followed HUFC; and in the mid 1980s he was involved in efforts to buy the club. He wasn’t successful, but retained his interest in the club – and had he not, there would probably not be a club today.

Wind on a few years to 1994, and Hartlepool United – a club with a long history of struggle – was fighting for it’s life. Garry Gibson had delivered promotion, but this had been followed all to swiftly by revelations of huge debts (for the time at least), broken promises, and growing protests from the fans. Players had been allowed to leave left right and centre, we were about to be relegated, and the new stand had still not got further than an empty side to the ground. We were on the verge of bankruptcy, and with automatic promotion and relegation in place it looked likely that if we didn’t go bust we’d be heading through the trapdoor into non-league. Who in their right minds would want to purchase such a club? The answer was, “Harold Hornsey”.

Hornsey took over the club, injected cash into it to keep it going, and got stuck in. Fan he may of been, but he was a canny businessman too – and he didn’t let his heart rule his head when it came to Hartlepool United. He worked long hours, put his own money in – even passed the running of his business on to his sons to give him more time to work at Pools – but avoided the trap that so many others have fallen into at other clubs. As he tried to get things together behind the scenes, Pools were usually struggling on the pitch – but Hornsey had the intelligence and common sense to realise that spending money the club couldn’t afford would only lead one way in the end. Instead he concentrated on trying to increase the money Pools earned from other activities – stating at one point that he wanted to try and have the club in the position where all of the costs of running the club and paying wages etc were being met before a single person payed to get into the ground on a Saturday.

His approach was definitely the right one. Pools were on an even keel financially, and Hornsey was looking at ways of making sure that remained the case. While many voices may have been raised in criticism of the team and manager, no-one criticised Harold; he may have made some mistakes along the way, but no-one was in any doubt that he was a Hartlepool United fan through and through, who wanted the best for his club. He was a man of his word. Before he had bought the club, he promised that the long awaited Cyril Knowles Stand would be built: it was. He promised that he would put right one of the most shameful episodes of the Gibson era – the non-payment of money from a benefit game to Cyril Knowles’ widow, Betty – he did. He also managed to give something back to the Pools fans that Gibson had taken away, with his reconstruction of the Town End Terrace and making it an area where Pools Fans could once more stand behind the goal.

It was a major surprise when he decided to sell to IOR in September of 1997; no-one seemed to be quite sure what IOR’s motives were, and it’s probably fair to say that if it wasn’t for the fact that Harold himself was convinced they were honourable, and their wanting him to remain involved with the club – initially as Chief Executive, and then as a director – Pools fans would have been a lot more dubious about the buyout.

In many ways, Harold Hornsey showed himself to be a model for other club chairmen in the lower leagues. An astute businessman, sensible in running his club, not promising what he couldn’t deliver while sticking to his word on what he could, prepared to talk to the fans – he did much to try and calm the powder-keg atmosphere at Halifax when trouble broke out during the live game there – and above all, a local man and staunch supporter of the club for many years.

The debt Hartlepool United owe to Harold is incalculable. Already, many fans are talking in terms of naming one of the stands after him. Without Harold Hornsey, in all probability there would be no Hartlepool United; it seems only fitting that the club recognises his contribution in this way. Rest in Peace Harold – and thanks.