Blue and White and Black

For Black History Month 2021, Ed Parkinson, on behalf of the Hartlepool United Supporters’ Trust, reflects on the contribution of four iconic black players to represent Pools over the years. The article was first published in our match day programme 23rd October 2021.

Pools are sometimes stereotyped as a white club in a white town but the truth is that the club signed its first black player nearly a century ago. Over the years many have followed in his footsteps, with a few becoming legends by contributing enormously to some of Pools’ better sides.

The first of my four, iconic black Poolies only had a brief spell at the club but it was part of a globe-spanning career. Tewfik Abdullah was an Egyptian international who came to play in Britain after excelling for his national side in the 1920 Olympics. Some accounts suggest that he went to Derby County because he’d starred against some of their players for a couple of Egyptian military teams that took on the British Army in friendlies during the First World War. This is possibly true, but it seems more likely that he simply decided to cash in on Egypt’s decent showing in the Olympics and Derby were the first club to offer him a trial. 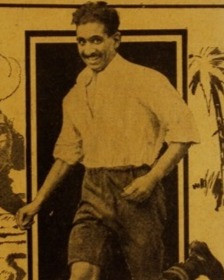 He did well and made the first team in a month, scoring on his debut as inside right against Manchester City. He made another eleven appearances that season but never became an established member of the team. Nevertheless, the novelty of seeing an Egyptian footballer in England meant that Tewfik attracted media attention and appeared on the front page of Topical Times magazine where he was dubiously described as ‘Derby’s Dusky Dribbler’ and presented against a backdrop which included the Sphinx, a pyramid and a couple of palm trees. No doubt the editor felt this was a polite portrayal by the standards of the 1920s. One obvious stereotype was missing but the omission was taken care of by Derby fans who claimed that Tewfik’s first words on running out for his debut were, “Where’s me camel?”  The fact that he really said “Where’s Mick Hamill?”, the name of the Irish international left half who would be marking him, did nothing to stop the ridiculous camel story from circulating.

Although Derby were relegated Tewfik did stay for the next season before eventually leaving for Cowdenbeath and then Bridgend Town. Next, in early March 1924, he arrived at Pools with the team struggling to get to grips with the playing standards in Division 3 North. Once more he scored on his debut, contributing to a 4-0 thrashing of Wrexham. After the match reports suggested that he’d made a big difference to the Pools attack and looked heavier and stronger than he had at Derby. His performance was described as a “god-send” but his influence waned and he failed to add any further goals as Pools finished second bottom and embarked on the first of many re-election campaigns.

By the time the club heard that their place in the Football League was safe Tewfik had moved on, playing in the US and then back in Egypt before finishing his playing career in Canada. He then continued as a coach and manager, eventually leading the Egypt team at the Helsinki Olympics in 1952 where they beat Chile 5-4 in the preliminary round before being knocked out by Germany.

If Tewfik’s greatest contribution to Pools was as a pioneer Tony Parry’s was as a stalwart in one of the club’s best ever sides. He arrived in 1965 as the young Brian Clough’s first signing and, having been brought in as a midfielder, became an intelligent defender who played throughout the 1967-68 promotion season that followed Clough’s departure to Derby County. It was Pools’ first ever promotion and his key role in the team ensured that Tony became massively popular with a whole generation of Poolies including Jeff Stelling, who has mentioned him as his favourite player. Plenty of others agreed and Tony won the club’s first Player of the Season award before performing well over the next few campaigns and reaching nearly 200 appearances. 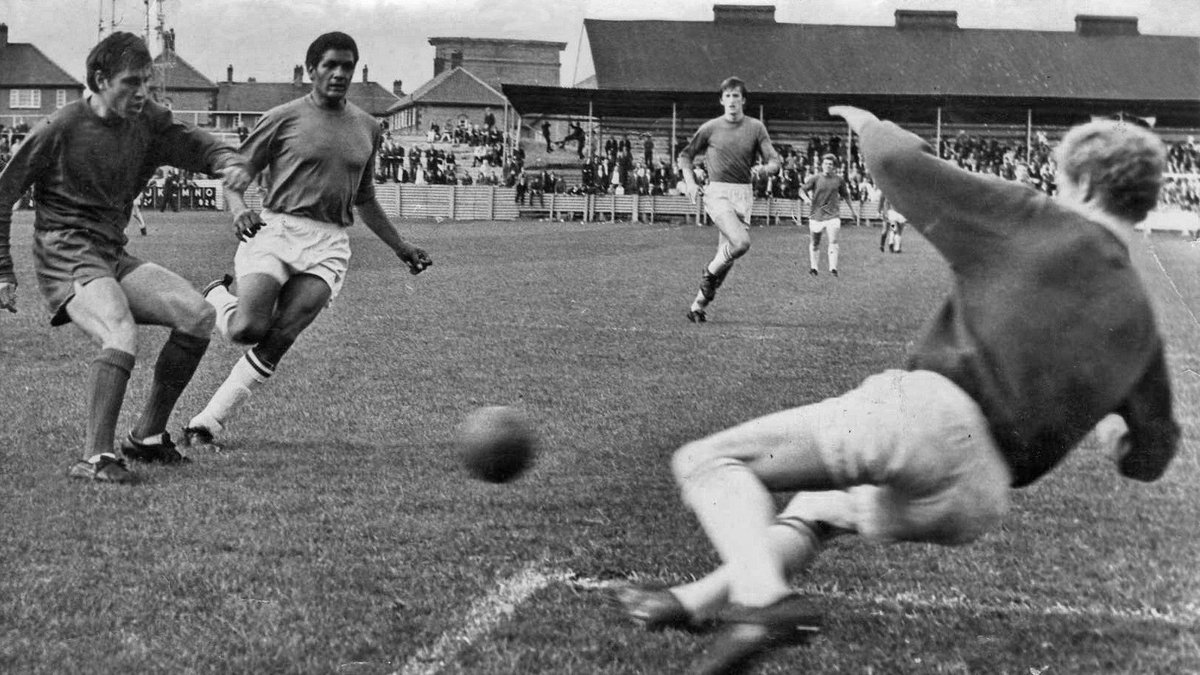 Even so, it came as a surprise when Brian Clough, who had built Derby into a title-winning side, decided to buy Tony for £2,500. It was a decent fee for a fourth division player at the time and, as Tony rarely played for Derby, it came to be widely viewed as a former manager helping his old club in an hour of dire financial need. As well as being instrumental in our first promotion it can be argued that Tony Parry saved the club by accepting a move that wasn’t really in his interests. No wonder he received a hero’s welcome when he returned to the town for the Centenary Dinner, the last time many Poolies saw him before his death a year later.

Lenny Johnrose was another black Poolie to play in a very strong team. Alan Murray had taken over from the extremely ill Cyril Knowles to clinch promotion to Division 3 in 1992. He was allowed to use some of the money from the sale of Joe Allon to Chelsea to strengthen the squad. The arrival of Andy Saville was universally applauded but the decision to spend £50,000 on a trainee from Blackburn who had only played first team football while on loan at Preston raised some doubts. At times it felt like Lenny had to do more to earn the fans’ respect than other players such as Saville and Dean Emmerson but, after more than fifty appearances for a side that finished mid-table in his first season, he certainly did that. A dynamic, powerful presence in midfield he also contributed with 11 goals and played in the January 1993 FA Cup triumph over Premier League Crystal Palace. As the team fell apart during the financial chaos at the end of Gary Gibson’s reign as Chairman, Lenny moved on to Bury, signed by Stan Ternent to add some steel to their midfield. Ternent then spent a large fee to take his talisman with him to Burnley. 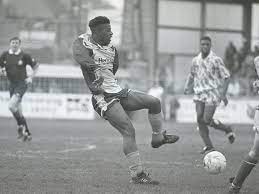 However, the greatest proof of Lenny’s strength has probably been his inspirational reaction to being diagnosed with motor neurone disease. He’s written a book and made dozens of media appearances promoting a drive to raise funds for the MND Association. HUST backed this initiative by working with Lenny on a fun day which included a Fans v Legends eight a side match and showed how fondly he is thought of in the town.

My final selection is a midfielder who made a lasting impression in only half a season, having arrived on a one-month loan from Reading. Aaron Tshibola, who has gained international honours with the Democratic Republic of Congo and now plays in the Turkish equivalent of the Championship, arrived in January 2015 with Pools ten points adrift of safety and looking odds on for relegation. The ‘Great Escape’ that followed is rightly credited to Ronnie Moore but, with his loan extended to cover Pools’ remaining fixtures, Aaron made a huge difference on the pitch and was central to a remarkable fight against the drop. He also became the first Pools player to have a Spandau Ballet inspired song dedicated to him and enjoy the experience – he’s indestructible! 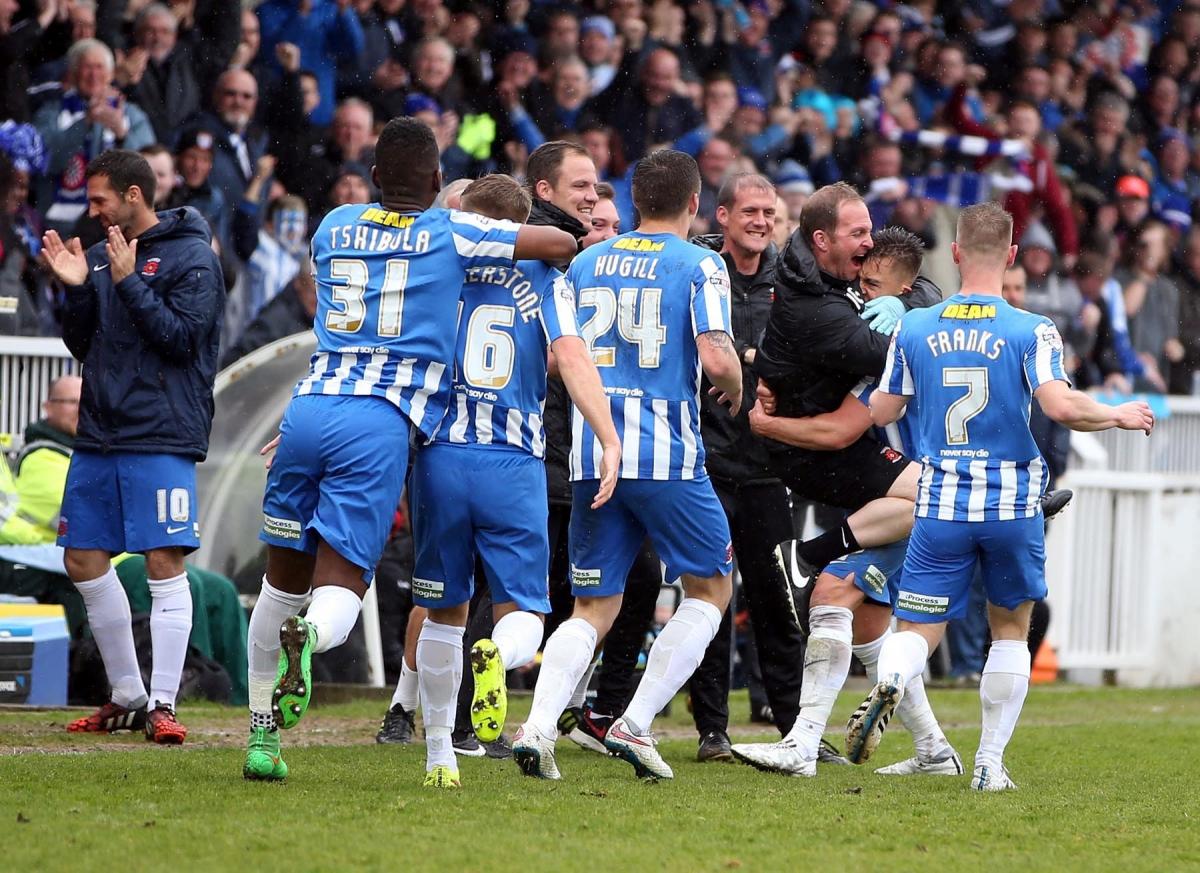 There are, of course, many other black players and fans who have played their part in Pools’ 113-year story. These four are just a personal choice but they offer plenty of proof that our club, along with the majority of our fans, have been welcoming and supporting players from diverse backgrounds since 1924. That’s something to be proud of and build on as we go forward and hopefully upward!