‘People are good’ says Dad of an autistic Poolie

When we published ‘A View from an Autistic Poolie’ we said that every autistic person has different experiences so we were delighted when Kevin Cosgrave got in touch to talk about going to the Vic, and a few other grounds, with his son Ged. We got the ball rolling by asking Kevin about the impact of autism on Ged:

Kevin: Autism impacts on every aspect of Ged’s life, he relies on other people for support for meeting his basic needs and has very limited speech. He has a sensory overload and this makes crowds, a particular challenge. Going to Pools has really helped with that.

Kevin: I started bringing Ged in 2012/13 when he was eight, initially this was just coming in when the gates opened at the end of the game, to see if he liked it. He clearly did, so we took it from there.

HUST: What challenges does he face at the match?

Kevin: I’d say Ged enjoys going and being there, but I think he has limited understanding of what is happening. The biggest challenge at the moment is the queues to get in, he can become frustrated and finds this hard to express. He also tends not to like people behind him, so we find the back row best. I’ll probably never know for certain, but I don’t think he understands the concept of winning and losing.

HUST: What does he enjoy most about being at the Vic?

Kevin: Again, it’s hard to know, but he certainly likes being around people, the feeling of being in a crowd, and he likes crowd singing.  I’d say going to Pools has done Ged a lot of good and helped with his development.

HUST: How are other supporters with Ged?

Kevin: He had a season ticket in the Mill House Stand from 2014 to 2020, and the people around us have always been excellent, if he’s finding it hard, people will smile, make positive comments, just be welcoming. People are good, I can remember an occasion when he was dancing to a Stone Roses record that was coming over the PA at half time, he clearly felt comfortable and a lot of supporters were pleased to see it. At times, he has a lack of spatial awareness, and bumps into people, but everyone is so understanding. I really think going to Pools, and some away games, has been so good for his development, he enjoys his life. We had a great time at Crystal Palace and ten years ago I wouldn’t have thought going to such a game would be possible.

HUST: Do things change over time?

Kevin: Yes, for example Ged hasn’t seemed so keen recently, we had to leave the Wycombe FA Cup game at half time. We’ve started to watch lower leagues, in particular Crook Town, more and he seems more relaxed there. I’m not sure why. Some Saturdays, I give him a choice from pictures and, at the moment, he clearly prefers to go to Crook. At Pools, we used to sit with my Dad, who had a season ticket all but one season since 1983, but sadly he passed away suddenly in 2021, so it’s not what it was at Pools. I’ll keep bringing Ged to some games though. 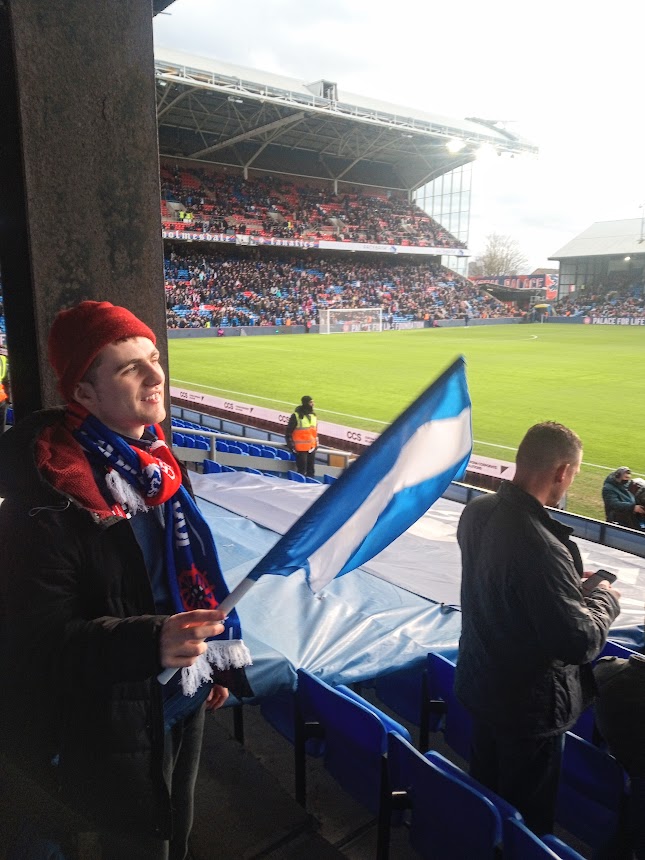 Kevin: I think that keeping hands occupied and so on, and ensuring there is something to focus on when there is sensory overload can help some people. It’s important to remember however that autism is a spectrum, there’s a huge difference from one end to the other and all the way between.

HUST: Do you think the visual story that HUST are producing might be useful?

Kevin: Yes, I think this is an excellent idea, social stories help children like Ged understand.

I think anything that encourages someone to bring someone with autism, and encourages understanding, is great. Like I’ve said, I think coming to Pools has really helped Ged so the general campaign and the specific activities are all good.

HUST: What else could fans and the club do to help improve the experience for autistic supporters?

Kevin: I think supporters are generally excellent in their understanding and empathy. We went to Crystal Palace and outside the ground a steward approached me and asked if I needed help with Ged, that she would let me in without queuing, I’ve had the same at another away game at Morecambe, but never at Pools.  Queues to get in are a big issue for some autistic people, who can find it very hard and, when that happens, their behaviour changes.  I’d love to be able to arrive half an hour into a game, and know that I could easily gain admission with him.

It would also help if people with learning disabilities and their carer could just show their tickets to a steward who opens a gate, as they do at Sunderland. That would be a great way to take out the queueing. It is brilliant that all football league clubs now do free carer tickets for people with disabilities, however, I mostly buy tickets online to avoid queuing twice and the carer tickets aren’t available. It would be nice if they could be put online at Pools, Gateshead do this so it must be possible.