A View From An Autistic Poolie

Every autistic person has their own experiences and opinions. To mark Autism Acceptance Week we spoke to Ryan, an autistic Pools fan and HUST member, about his early years, way into football, and what could be done to encourage more autistic people to come to the Vic. There are almost certainly other autistic Poolies with different stories but for now we’re concentrating on this one:

HUST: When did you realise that you were autistic and what impact did it have on you?

Ryan: I was diagnosed with autism when I was only four years old, which is quite young. It made growing up difficult and still has ramifications today. I struggled to make connections with people and I always felt lonely.

Ryan: It was, but not all the time. The North East Autism Society gave me four great years where I focused more on myself as a person and building connections with other people. I met lots of new people and had loads of experiences I’d never got elsewhere. I also travelled through a lot of the north east, it was very enjoyable and I made good friends.

HUST: So, did you start liking football at that age?

Ryan: No. To be honest as a child I never really had a way to get into football, I didn’t really know clubs like Pools existed until I was much older. I had a lot of social anxiety so I rarely left the house, plus I had little to leave the house for anyway. I think a lot of people also wrongly assume all people with autism dislike big crowds and loud noises, so they wouldn’t encourage me to go to football or ask me along. Personally, crowds and noises don’t bother me too much so I might have been fine. 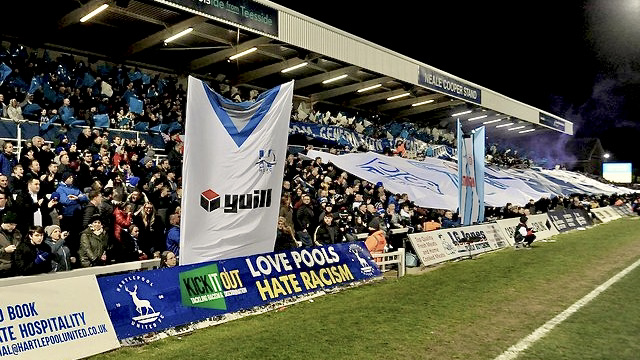 HUST: When did you finally get to the Vic and how was that first match?

Ryan: April 21st 2018, vs Torquay United, final home game of the season and it was a 1-1 draw.
To be honest, I can’t remember any of the other details that well! I know for sure I enjoyed it though. Had no problems getting in and out of the ground and everyone I met was nice and pleasant.

HUST: How’s it been since?

Ryan: Great fun! I haven’t had any problems. It’s strange, I have social anxiety when going to a supermarket for example, yet at the Vic I’m absolutely fine. I wish I’d started going sooner!

HUST: Do you think the sensory kits are a good idea?

Ryan: This is a pretty challenging question because I never really used sensory equipment as a child. I do think it’d be good to have sensory kits and autism trained stewards at the Vic though. That would be really good for families, I think Middlesbrough have something along the lines of that as well so it could be possible for the club to implement.

HUST: Are you pleased that the profile of Autism Acceptance is being raised at Pools?

Ryan: Yes, I think it’s nice autism gets remembered once in a while, for me personally with my experiences it does feel like a disability yet it’s never really spoken of like that. Not a lot of people get diagnosed young now either, so by people raising awareness, I feel less alone. I hope that makes sense, it’s a personal view.

HUST: What would you say to other autistic people who might be considering a trip to the Vic?

Ryan: Go for it and don’t over think it. Even if you’ve never watched football before, still do it. You’ll instantly feel a belonging and a mutual bond with thousands of people. Like I said I feel like I missed out not going sooner.