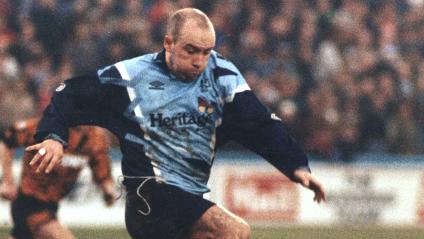 Beating Crystal Palace in 1993 saw Pools become the first lower division club to knock a Premier League side out of the FA Cup. The ‘unquestionable penalty’ and ‘not particularly cold for Hartlepool’ weather are now the stuff of legend whilethe old Match of the Day footage has been getting hammered on YouTube over the last week. Even so, when HUST talked to three of the victorious team they still managed to tell us a few new stories about their giant killing feat.

Trotting out to face a Premier League team when you’re the reserve keeper and fresh from the youth team should probably turn you into a nervous wreck and I might have looked that way! To be honest though, I don’t remember having time to get too worked up because I didn’t know I would be playing until I heard Hodgy was out.

I wasn’t happy that we had to be in early on the day – I hated getting excited on the way to the ground and then having to sit about. I shouldn’t have worried because there was loads going on, signing balls and shirts, visitors popping in, plenty to keep me busy.

One visitor was Tony Gubba, a famous commentator at the time, and he wanted to check my age. I think he had me down as 17 so I was desperate to put him right – if they said I was only 17 on Match of the Day I’d have never been able to get served with a pint anywhere in the town!

Being told that Palace wanted it off gave us all a lift but they started well and on one breakthrough I had to spread myself and make a block. Not the greatest save, but it made me feel better and we just grew into the game. Dean Emmerson in particular was awesome, tackle after tackle just gradually taking control, but all of the lads in that team were strong as well as being good players. We dominated the second half and there was only going to be one winner by the time we got the penalty. I’m sticking with our official WhatsApp group policy that it was a nailed on penalty although it might not have looked like one on Match of the Day later!

One slight disappointment that day was that the Palace players just left when most teams would have a quick pint in the players’ bar before setting off home. I would have loved to meet Nigel Martyn who was a top goalkeeper

In the next round, we were very unlucky to lose to Sheffield United at Bramall Lane. Their goal was a deflected shot that clipped my arse on the way in. I’ve always had a big arse but if had just been a bit bigger we’d have brought them back to the Vic!

Ryan Cross, full back, carried from pub to pub

People say it was cold but I remember driving up to Hartlepool to sign for them when I was 19 – it was June and me and my Dad had to put our coats on as soon as we got out of the car! The match itself is a bit of a blur but I certainly remember the scenes afterwards – total pandemonium! We all went out and got cheered in every pub we went to, in fact we got carried from pub to pub in Church Street.

I was sharing with Dean Emmerson back then and we ended up in 42nd Street as usual – Dean was a bit if an animal on a night out! They were a great bunch of players and great mates too. I’d give a particular mention to John MacPhail, Monty was a very smooth bloke and was a hero to us young lads! I’m sure we’ll all think about him and Lenny Johnrose on Saturday.

I do remember the penalty – it was nailed on! Well, maybe not, but once we got it we knew Sav would score, he was so calm. Him converting wasn’t a worry but when I watch the Match of the Day footage, even though I’m not religious, I still cross myself while Dermot Gallagher is thinking about his decision!

Only advice I can give the current team is stay in the game. As the underdog, if you’re level with ten minutes to go the favourites get scared and you’re the ones on top!

I drove down to the ground and did my usual routine of dropping my bag off in the dressing room and then heading out for a look at the pitch. On the way I heard a couple of cockney voices going, “Can’t believe it’s on, that’s crazy…” and stuff like that. I thought, “Hold on, it was like a spring day in Blackhall, there’s something going on here.” And there was, they really wanted the match off even though the pitch was playable.

To be honest it fitted right in with what we always used to say about southern clubs not wanting to come here – the whole southern softies thing that we used to joke about! It relaxed us and got our confidence up.

The crowd were well up for it as well and that really does make a huge difference. I always got on great with the Mill House terrace and they used to love it when I wound opposition players up. Cyril Knowles had told me to have a dig at my full back from kick off and by the time we played Palace it was automatic. They had a young lad called Bobby Bowery on the left of their midfield and I thought he looked a bit frail so I got stuck into him early doors and after that everyone could smell blood. Lovely! I always had my best matches when we had a big, noisy crowd, it really did make a difference. It’s funny because when I signed our John said, “Are you sure Brian? You’re ex-Darlo and a yakker, they’re liable to hate you.” It was never a problem though.

I don’t care if the penalty was a bit dodgy, we deserved to win. My only concern was Andy Saville taking it. He was an excellent striker of the ball and completely calm but I just don’t like left peggers taking spot kicks! He did alright though.

It was one of a few great days at Pools and I wish I could turn the clock back. Poolies back you to the hilt as long as you give 100%, that was true for me throughout my career and it’ll be true for the lads on Saturday. As long as they graft, and put some real heart and desire into it, the fans will be their friends for life. And that’s what football is all about – fans and friends.

This article is dedicated to Lenny Johnrose and John MacPhail, heroes of 1993 and both facing adversity off the pitch with the same courage they displayed on it.