Her Game Too launched on Cup Final day less than a year ago and Bristol Rovers quickly became the first club to form a partnership with a campaign that was initially restricted to raising awareness of sexism in football. Since then 55 professional clubs, and many more grassroots outfits, have signed up and the group have become more ambitious. Could Pools be next to give some practical backing to women and girls in football?

To find out HUST met with Eve Ralph, a Bristol city fan and one of the group’s founders, and Jill Simmonds who sits in the Cyril Knowles and recently became Pools’ ambassador for Her Game Too.

HUST: Her Game Too has grown incredibly quickly. 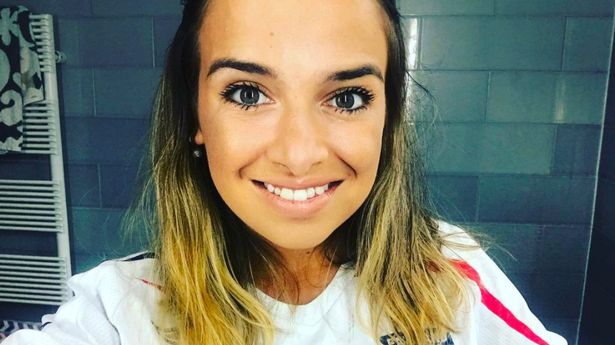 Yeah, and we genuinely set up just to raise awareness of some of the sexism we’ve experienced, we didn’t in a million years think it would get this big. I suppose what we said struck a chord with female fans all over the country and it just took off through social media.

Whatever the reasons, we’ve almost been gifted a great platform to expand our aims, to think about who we can work with and what we can achieve, it’s just evolved on a weekly basis.

Can you tell us about your experiences of sexism?

Eve: Online! Every female football fan I’ve ever met has experienced online sexism. You’ll put a comment on a match or a player on Twitter and the amount of abuse from people who maybe don’t agree but really come for you because of your gender is incredible.

Typical things are like, ‘Get back in the kitchen…Why don’t you make me a sandwich…You don’t know what you’re on about’ and so on. Also, in real life. I’m a qualified coach and I used to work with a boys under 12s team and had a problem with a parent who didn’t agree with my decisions and tried to undermine me. My boss ended up telling him that what I was doing was fine – he just had a problem with me being female.

Recently I got refused entry to a pub where I was going to meet my brother before our match at Fulham. They said I didn’t look like an away fan even though I had a Bristol City shirt on! It was the first time I’d travelled to London on my own, which is a bit daunting, so to arrive and find out I wasn’t welcome wasn’t great. I was suddenly worried about getting to the ground and so on. That sort of thing is one of the reasons our campaign is about the whole day, not just the 90 minutes. Women have to think about safety getting to and from the ground, in car parks and on trains. When things go wrong what should be a great day gets spoiled and that can make you wonder whether it is worth it, you can question whether you want to go again. 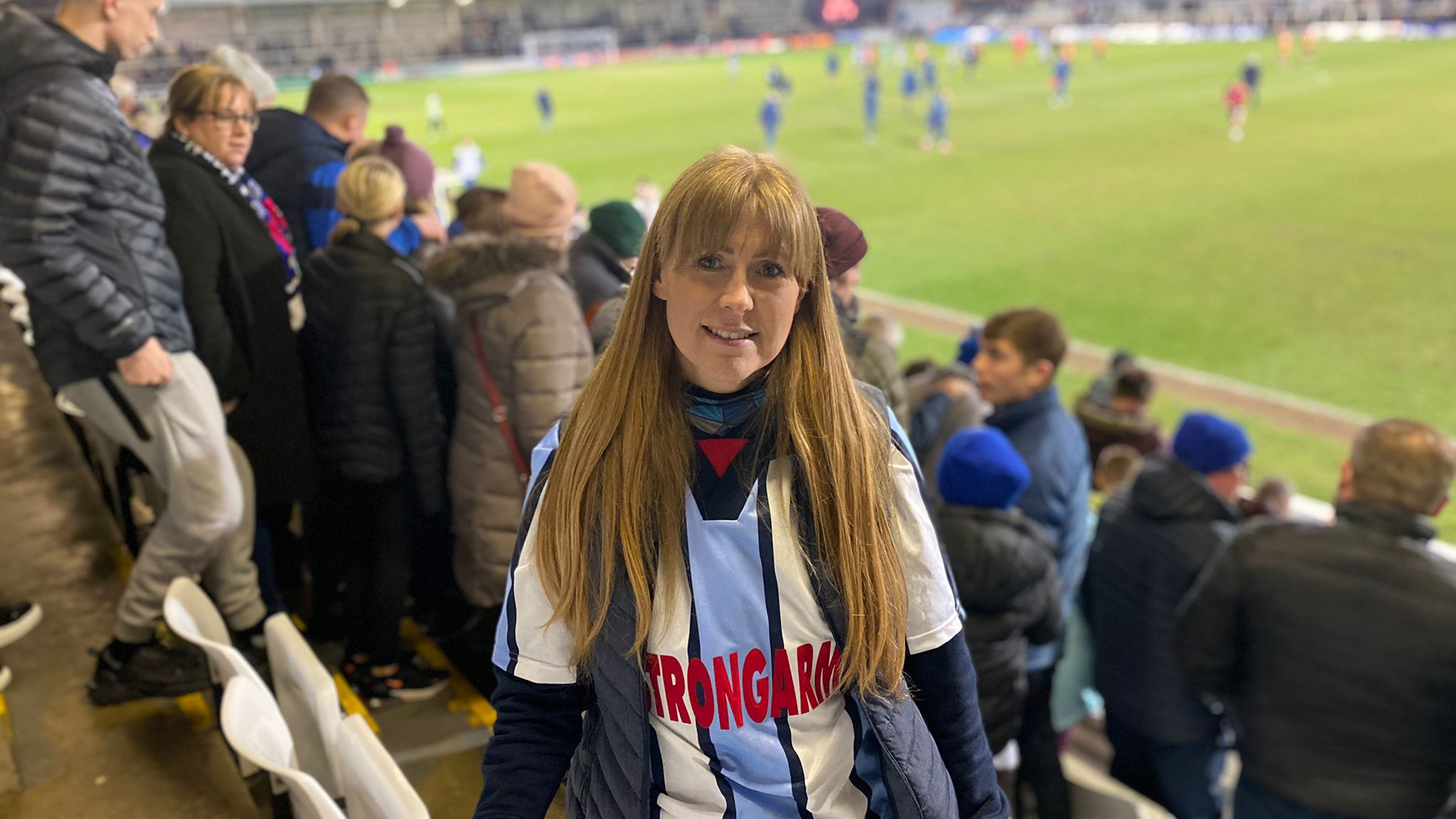 I went to Pools when I was young, standing with my Dad in the Mill House in the 90s and doing that you learn to cope with the banter and what’s going on. You learn how to handle it but not really question it or call it out. It’s fair to say there was no shortage of sexism!

I left the town and I didn’t really get to football while I was away. That doesn’t stop you feeling like a fan though, I always followed Pools’ results and thought of them as my club. I moved back and started bringing my 9 year-old boy to Pools recently, I’d planned to when I first moved back to the town but unfortunately my Dad took ill and then passed away so that didn’t happen.  Still, I was determined to take him and get back there and now we’ve got the bug again, and season tickets. We sit in the Cyril Knowles and I have to say the difference from when I was young is massive, there are lots of female fans, including some older ladies and the atmosphere is fine for kids.

One thing I have noticed is women officials getting a lot of stick and then people saying ‘well she was terrible’ but to be honest most of the referees in League Two are pretty bad, not just the women!

The Crystal Palace match was interesting as well. I was talking to one lady at half time who said that when they’d got into Selhurst Park there were some lads in their seats – they said some people were in their seats – and the stewards did seem to be letting everybody sit anywhere. She ended up at the back of the stand in the area with a restricted view. I had a look round you could see that the back part of the away end was full of old people, women and kids. Palace were great hosts in so many ways but deciding not to guide people to the right seats wasn’t fair on some fans. They seem to be a friendly, family-minded club that tries to welcome everybody so they really should have a think about that.

So how did you become an ambassador?

Jill: I saw the campaign on Twitter and thought, well, there’s always been a lot of female fans at Pools, of all ages. I talked to a couple of the older fans near me and they said they feel safer in the Cyril Knowles, one lady who has been coming since the early ‘70s said, “We leave the rabble over there, we’re alright here.” She was joking of course, but if crowds are up and if she couldn’t get her usual seat I think she’d be worried about sitting anywhere else and that’s a real shame.

So, I followed HGT on Twitter, noticed that they were asking for volunteers and when I looked on the website Pools didn’t have anybody so I got in touch. They said we didn’t need to have a partnership yet and that I could possibly get the ball rolling, so we had a video call and talked about promoting women in football and women’s teams as well as campaigning for female fans. After that I was happy to put myself forward to try to get Pools to agree to a partnership.

Not long after that they got back in touch to say that one of the women who works at the club had also been in touch so we’ve got the start of a team champion Her Game Too at Pools – we’d love to have more involved too, all ages, different parts of the ground, supporters’ groups. It’s all gone very quickly so we’re just getting started really.

What do Her Game Too ask clubs to do if they partner with you?

Eve: We’ve got a list of suggestions – it isn’t a checklist saying every club should do them all because we understand that capacity varies. It includes a press release saying that the club doesn’t accept sexist abuse in the ground, a reporting system so people can point out sexist, and other, abuse, but also posters around the ground with our logo, the club crest and maybe sponsors who want to be involved along with details of how to use the system. Some clubs have put visuals up on boards and screens, and we encourage clubs to have a Her Game Too fixture with teams warming up in our tee shirts and female ball girls and flag bearers. We also like to showcase female fans and the female staff that the clubs have – maybe an interview in the programme. A couple of clubs have also introduced a female fan forum, just to give a perspective on what the match day is like for them because some clubs don’t know about things like toileting issues and so on. It’s been good for the clubs to find out what they can do to make the day a bit more welcoming for female fans. 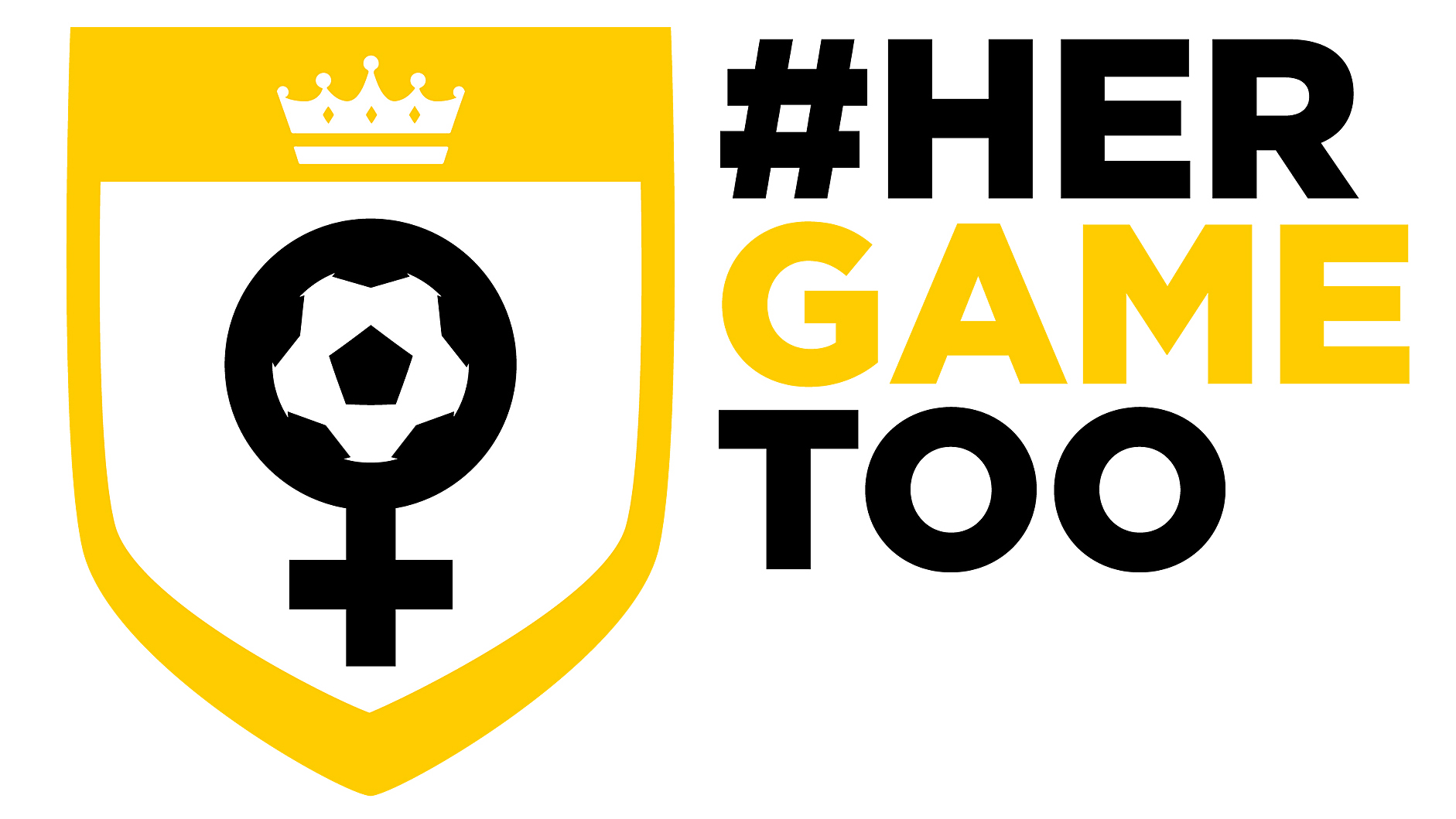 Have you got anything specific in mind that Pools could do yet?

Jill: Well, for a start, there are empty advertising spaces in the women’s toilets in the Cyril Knowles and empty advertising hoardings around the ground. We could use them to let people know about the campaign. That’s why we need people from all over the ground though – what needs doing and what are the opportunities? If anybody reading this can help, or wants to talk, please get in touch.

Maybe a female forum or female representatives on a fans forum would be a good way for the club to get ideas about making girls and women welcome. The ground is rarely completely full so how can we encourage women, maybe bringing their children? Maybe they could promote that somehow, and maybe create a female focus for one of the days with the youth partnership because there are girls’ teams involved, maybe make them the ball girls? Maybe give out a few free tickets? There are lots of possibilities the club could consider. They’d all help to create new, long-term fans and none of it would cost much, we just need to get started!

HUST: Is there a commercial benefit to being inclusive?

Yes, but perhaps some fans don’t see it. We do appreciate that we aren’t owed anything and things like advertising boards usually cost money, but girls who come to our designated fixtures often want to go back again. Clubs who support the campaign, do the sort of things Jill mentioned, donate some tickets and so on, end up with repeat customers – girls who want to come to football regularly and feel welcome.

Some clubs are perhaps apprehensive to partner as they don’t think sexism is so much of an issue but the campaign isn’t just about finding examples of sexism, it’s about looking at whether a Dad with a 10 year old daughter would feel OK about letting her go to the toilet on her own, things like that. The percentage of girls and women is so low and there must be adjustments, little things that most clubs can do to get those numbers up. They all pay the same as men and boys for tickets and refreshments and merchandise so it makes business sense too. Nobody has more right than anybody else to be at a match but the demographic of football fans is changing.

Jill: If we can encourage girls who play football to come along it’s all new fans, new revenue for the club. If we can make an environment that means Mums are relaxed about bringing their kids there’s some extra future Poolies. Grans who’ve been coming for decades should feel safe and respected in every part of the Vic. Supporting your local club only gets into your blood when you come to matches so if we want the whole community backing Pools we have to make sure everybody is welcome, looked after, and wants to keep coming.