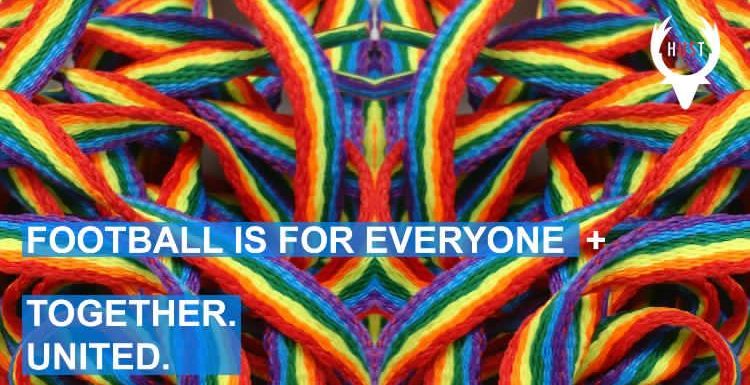 As part of the ‘Rainbow Laces’ campaign link up with local LGBT+ support group Hart Gables, we asked some of their service users some questions relating to their experiences and opinions on the participation and watching of sport, and we have published these below.

From the answers provided it is evident that barriers still exist for those in the LGBT+ local community for both participating in and watching football. This is a key reason why helping raise awareness through the ‘Rainbow Laces’ campaign is so important to help promote Hartlepool United as a welcoming and safe environment for all.

However, it is clear that to break down barriers more needs to be done, and this goes beyond football. HUST is committed to continue working with Hart Gables to promote the work they do in the community to support those in need, and the work that they do in terms of educating the wider community on issues that the LGBT+ community face.

We appreciate that there is no quick fix, however, as HUFC supporters we can all help make small strides and the ultimate goal is to reach a place where those within the LGBT+ community feel comfortable when it comes to watching and participating in sporting events.

We again thank HUFC for getting behind the ‘Rainbow Laces’ campaign as we firmly believe awareness and unity is a significant step forward.

Do you feel that being part of the LGBT community means there are any barriers to participating in football?

From the answers provided from this question, it is evident that a lot of barriers have existed from an early age for many that identify as LGBT+.

‘During school in the 90s there was a lot of homophobic bullying. I know someone who was called ‘sissy’ by the PE teacher because he wasn’t great at football. Those sort of slurs, people would say without thinking, without realising the impact they have on people. It made sports really daunting as an LGBT person. You’d just think, I’m not welcome in this environment, this isn’t for me, I’ll stay out of it.’ (35, bisexual, trans man)

‘During PE at school I wouldn’t get in the shower with everyone else because I didn’t like the body I was in.’ (24, trans woman)

‘When I did do PE at school, I was getting called a freak and a fairy. I would make excuses and say I was bad when I had to do PE. I used to write a note and forge my Mum’s signature. I thought there was something wrong with me.’ (53, trans woman)

‘The last year of school I didn’t do PE – the teachers let me revise instead.’ (27, gender non-conforming)

‘People labelled me as feminine, said people who had feminine characteristics couldn’t do sport, wouldn’t be good. I went to an all boy’s school. There was a culture of masculinity and anyone who didn’t fit into that was made to feel they would be bad at sport.’ (30, gay man)

‘Our male PE teachers were very macho men. I didn’t feel comfortable, they looked at us sarcastically.’ (30, gay man) ‘We had to run through communal showers one at a time and I would feel very vulnerable. I didn’t realise I was trans at the time and I was very uncomfortable with my body and it being exposed.’ (35, trans man)

‘I was uncomfortable changing in front of people in the shared changing room.’ (22, trans woman)

This question provided an example of a HUFC fan, who sadly does not attend the matches now out of fear of discrimination.

‘I used to go to Hartlepool United. Since I came out as a trans woman I don’t go to the grounds as I’m afraid of facing discrimination. Before I transitioned to female I would get on a bus and go with my mates to matches. There’s no way I would ever get on that bus now, remembering what it was like from the ‘other side’. I know I’d be tortured.’ (Trans woman, 53)

What do you think local football clubs and organisations can do to encourage more LGBT participation and spectators?

You can see some varied answers here, one answer being relevant to the subsequent question and two respondents identifying that they would feel comfortable attending games if they attended with someone supportive.

‘Positive representation – it’s great that there’s a gay footballer as a character in Corrie right now, it shows that it’s alright and it’s normal and that people can be gay and play football.’ (22, trans woman)

‘From school onwards, less gendered sports, less expectation to conform to stereotypes. Encouragement and embracing diversity more. Opportunities to take part in sport where competition isn’t the only thing, but more about enjoyment, exercise and being healthy in body and mind.’ (30, gay man)

‘Lots of LGBT+ people live in poverty, we have a high risk of unemployment for many reasons. If attending sports events was more affordable it would make it easier.’ (35, trans man)

‘A safe way to travel to get there, with other people from the LGBT+ community.’ (32, trans man)

Currently no professional male footballers in England are openly gay. If this was not the case then do you think this would encourage more LGBT participation/spectators in football?

This answer from one service user highlights that ‘coming out’ can still be scary for anyone, however, also sharing a widely held view that once one footballer comes out then it could massively encourage others that identify as LGBT+ to participate in sport.

‘It’s still a scary thing for many to come out. Even today, people still fear they’ll lose their careers, their popularity and their livelihood. So I understand why people stay in the closet. I think though that if more footballers felt able to come out, it would be positive representation, particularly for young LGBT+ people who want to become involved in sport.’ (35, trans man)

What do you think football can do as a whole to encourage gay footballers to be open publicly regarding their sexuality?

To end the survey, we think this is an important summary and demonstrates that everyone in football, the local community and indeed the wider world has an important role to play to help get towards the goal of true equality and diversity, also showing the importance of the ‘Rainbow Laces’ campaign.

‘I think homophobia and biphobia has to be tackled on every level. It’s amazing that there are campaigns like Rainbow Laces and if that demonstration of inclusion can carry through to the pitch, the locker room, the stands where you can hear homophobic chants, everywhere a footballer might encounter overt or casual homophobia, if it can be challenged by each person rather than accepted as systemic, then hopefully things will start to change.’ (35, bisexual, trans man)

Thank you to Hart Gables and their service users who contributed to this survey.