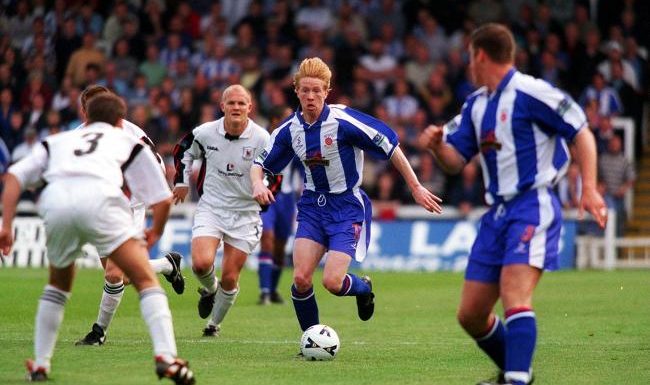 Reasonably sane supporters of Hartlepool and Darlington probably approached most seasons in the last century with a common set of priorities – stay in the league, stay solvent and finish above the local rival. The first two have proved difficult for both clubs at times but over­all supremacy in the third area is a matter of heated debate.

Hartlepool have beaten Darlo in 53 league tussles while they have managed a meagre 51 wins. On the other hand, they can boast five brief surges out of the bottom drawer, while we have managed only two. In 1999, however, the priorities for Darlington shifted irreversibly while ours stayed the same as ever. The arrival of reformed safe cracker and multi-millionaire George Reynolds end­ed their traditional low aspirations

Georgie, as Feethams regulars call him, is a Sunderland fan. He wanted a new toy and opted for Darlington FC. His goals were clear and, in his opinion, affordable. Within five years Darlington would be a Premiership club with a 25,000 all-seater stadium near some major road – and ticket prices would be kept low throughout this process.

In an act of questionable judgment, George declared that this meteoric rise would be masterminded by David Hodgson (ironically previously linked with the manager’s role at Hartlepool), who might have been the only manager available who would agree to pay inflated wages to attract so many old Roker favourites to Feethams. Darlington were installed as pre-season favourites for the championship. Our odds to do as well were 55-1. We were, however, hot tips to go down.

At Victoria Park, Chris Turner worked with much the same squad that had avoided the drop last year. Our nouveau riche neighbours started well, disputing the top spot, we gathered only eight points from our first 11 matches. How­ever, when the sides met in Hartlepool in October, the relatively young Pools side ran Dar­lington ragged, the old stars didn’t seem ready to work for a result, and we emerged as 2-0 winners.

This match changed the season for both clubs. Darlington’s swagger disappeared and their form dipped; nobody was scared any more. Pools went on a run which ended in them claiming the last play-off berth with an extraordinary ten-man 3-0 victory at Hull. Even when Gary Strodder scored the own goal that effectively killed any hope in the play-off semi-final I didn’t hear one Poolie criticise him. Pools were given a standing ovation at the end of both play-off matches, despite their defeat. These apparently odd reactions are easily ex­plained. For us to be there playing for a place at Wembley represents a very good season indeed. For them, our mere presence was a reminder of their underachievement – and that was before they lost to Peterborough in the final.

The events at Feethams this season have fundamentally changed the relationship between the two clubs, probably for good. If Reynolds’s business plan comes to fruition, the 3,000 loyal, passionate Darlington fans who have kept the club afloat for years will be swamped by thousands of Tyne, Wear and Teessiders who would rather be elsewhere but can’t afford it. The local media will continue to fawn over them but any season that does not lead to a Darlington promotion will be deemed a failure.

Meanwhile, on the Durham coast our successes will be hard earned and fully savoured. Teams will develop slowly rather than being bought off the peg and we will continue to drink in our favourite pubs before sitting and standing in our usual places. I didn’t enjoy losing in the play-offs but I’m still glad George Reynolds didn’t buy my club.

Published with the kind permission of www.wsc.co.uk–  July 2000.